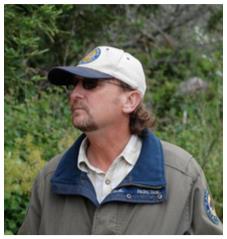 This article presents a brief discussion of archaeological techniques used to determine the ages of local ancestral Native American cultural sites. It is submitted in response to the generous support of the CSPA membership, who funded two radiocarbon samples that were recovered from a coastal archaeological site near Montara State Beach.

One of the fundamental goals of archaeology is to establish calendric ages for past cultural events. There are several ways to do this, including the following techniques: artifact seriation, obsidian hydration, and radiometric analysis. Each of these techniques has limitations, but after years of improvements--along with an increasingly larger data base, past culture chronologies have been accurately sequenced and have revealed a great legacy of complex human development taking place over many millennia throughout central California.

Artifact seriation involves organizing certain artifact types into a temporal order based on their styles and purposes. For example, ancient spear and arrowhead forms have shapes that can be assigned to general time periods of the past and can be ranked from oldest to most recent, in the same way that we might organize cars on the basis of their technological development and appearances. In prehistoric California, olive snail shell beads and abalone shell ornaments are especially time-sensitive artifact classes, and changing forms have been matched to calendric dates spanning the past 10,000 years.

Another means of relative dating is Obsidian Hydration analysis. In a nutshell, this involves removing a very thin slice of the edge of an obsidian artifact, then grinding it wafer thin to mount on a glass slide for viewing under a high-powered microscope, and reading the measured thickness of water absorbed on the surface of the artifact. This water band, or rind, is measured in microns, and the longer the edge of the artifact has been exposed to the atmosphere, the thicker the rind gets. All glass, which obsidian in fact is, will absorb traces of water; however, it was discovered that different obsidian sources (geographic points of volcanic origin) retain their own combinations of trace elements, which cause them to hydrate at different rates. Because of this, each specimen must be “sourced” before hydration analysis. Sourcing involves reading the results of a laser-generated light spectrum shown through the obsidian object by a device called a spectrograph. The method, known as x-ray fluorescence, allows us to source the obsidian and reconstruct the geography of prehistoric trade and exchange routes over time. Once the specimen has been sourced, it can then be cut and the hydration rind measured.

Tribes along the San Mateo Coast had access to a variety of obsidians from both the Napa Valley and Clear Lake flows to the north, as well as several sources on the eastern side of the Sierra Nevada Ranges. Detailed mapping of the temporal and spatial distributions of obsidian specimens in local sites and their source origins is an ongoing process. Unfortunately, variables in soil moisture and temperature can affect the results, so it’s desirable to run large numbers of specimens and mathematically work out their “mean hydration values.” This can be a difficult proposition in coastal sites where obsidian artifacts are not very numerous, and the sampled assemblages result in wider spans of time than they actually should be. Also, this kind of work requires specialists who work in a laboratory environment, where they necessarily charge their requisite fees.

With radiocarbon dating we can get an absolute age; therefore, this is the best method at our disposal. Of course, this application also involves a range of fees for services that are now commercially available through a number of physics labs. The method was developed by American chemist Willard Libby in 1949 and involves measuring the emissions of the radioactive isotope carbon-14 as it is released from decaying organic materials. In short, cosmic sub-atomic particles constantly bombard the earth, producing high-energy neutrons. These neutrons react with nitrogen atoms in our atmosphere to produce atoms of carbon-14, or radiocarbon, which are unstable because they have eight neutrons in the nucleus instead of the usual six for ordinary carbon. This instability leads to radioactive decay at a regular rate. Steady atmospheric concentrations of 14C are passed on uniformly to all living things through carbon dioxide and the food chain. Only when a plant, animal, or human dies does the uptake of 14C cease, and the steady concentration of 14C begins to decline through radioactive decay in a patterned and predictable rate. By measuring the decay over a given period of time through a Geiger counter, a date can be assigned that reflects the age of the sample at the time of death.

Willard Libby assumed that the atmospheric conditions that generated 14C were constant; however, we now know that this is not the case and a range of variables can affect the dating results. Fortunately, researchers have established correction applications that bring the raw radiocarbon dates into a recalibrated, “corrected” calendric date. For example, in the case of mussel shells (which are a useful material to sample in regards to coastal archaeological sites, given their abundance as dietary refuse), seasonal coastal upwelling of colder deep waters brings older carbon isotopes up from the depths, which are absorbed by the mollusks and incorporated into their shells. So when we date the mussel shell, we need to correct for the influences of these older 14C atoms. For sites dating to the last 3000 years along the San Mateo coast, a correction of 225 +25 years is factored in.

Up until about 10 years ago, the minimum sample size of mussel shells useful for radiocarbon dating was about 32 grams weight. That’s a lot of shells, and collecting them from volumetrically controlled archaeological excavation pits required sampling from various strata to get a sufficient combined total weight. This often resulted in the blurring-out of more subtle variations in time represented by the archaeological deposit. But a breakthrough in radiocarbon dating referred to as Accelerator Mass Spectrometry, or AMS dating, now allows for the sampling of sizes as small as 1/5th of a gram weight! This revolution in method has facilitated absolute dating of single shell specimens, individual shell beads, tiny dietary animal bones, and has been recognized as a less destructive and invasive dating method for human remains.

CSPA funded the sampling of two mussel shell AMS dates recovered from a prehistoric archaeological site located on the eroding cliffs of Montara State Beach. The site, recorded as CA-SMA-132, is one of several that still exist in the area; however, all of these local sites are threatened with loss from coastal erosion, construction activities, and artifact looting. The dated samples from SMA-132 were selected for two reasons: first, we needed to document the age of the site as part of the environmental review for proposed improvements to public access near the site; and second, we were interested in the possibility that the results might reflect dietary refuse from the Portola Expedition of 1769, and identify the location of an event described in the expedition’s journals. Don Gaspar de Portola commanded the first Spanish land exploration into Upper California, which ultimately lead to the inadvertent discovery of San Francisco Bay, followed shortly thereafter by the colonization of our state. On the eve of their great discovery, they had camped along Martini Creek and dined on the large mussels available on the nearby rocks of Point Montara. There was a possibility that the mussel shells visible at SMA-132 might be the result of that event and we were curious to know.

The resulting AMS dates from SMA-132 turned out to represent two different temporal ages, which accords with the fact that both samples were taken from auger borings at two different places within the larger site. Unfortunately, neither of the resulting dates can be attributed to the Portola Expedition; but of great interest to local prehistory, the dates reflect ancestral Native American shell gathering and consumption events at AD 445 to AD 660, and again at AD 1010 to AD 1195. These dates correlate to a period of great social change among the many large land holding tribal communities that were forming throughout the larger San Francisco Bay Area and contribute to our understanding of regional culture history and prehistory.