When it’s hot in the Bay Area and valley, where do you go to get relief? San Gregorio and Pomponio state beaches are popular summertime destinations where you can enjoy the beach and the cool temperatures along the coast. There is much more to these beaches, however, if you know their secrets.

Both are “pocket beaches”--sandy expanses formed at the outlet of creeks and protected to the north and south by high cliffs. In the winter the creeks flow across the beaches and into the ocean but, when the rains stop, sandbars form and block the creeks. Then water collects in lagoons and occasionally covers most of the beach.

Sometimes the remaining beach is strewn with driftwood--irresistible material for would-be builders. The condition of the beaches can vary from season to season and even day to day, only adding to their interest.

Supervising Ranger Michael Grant observed that these beaches are both great places for picnicking and beach walking and they are “a bit more rural and untouched than beaches in northern San Mateo County and San Francisco.”

If you get bored with the sun (or fog), surf and sand, there is more at these beaches to explore. 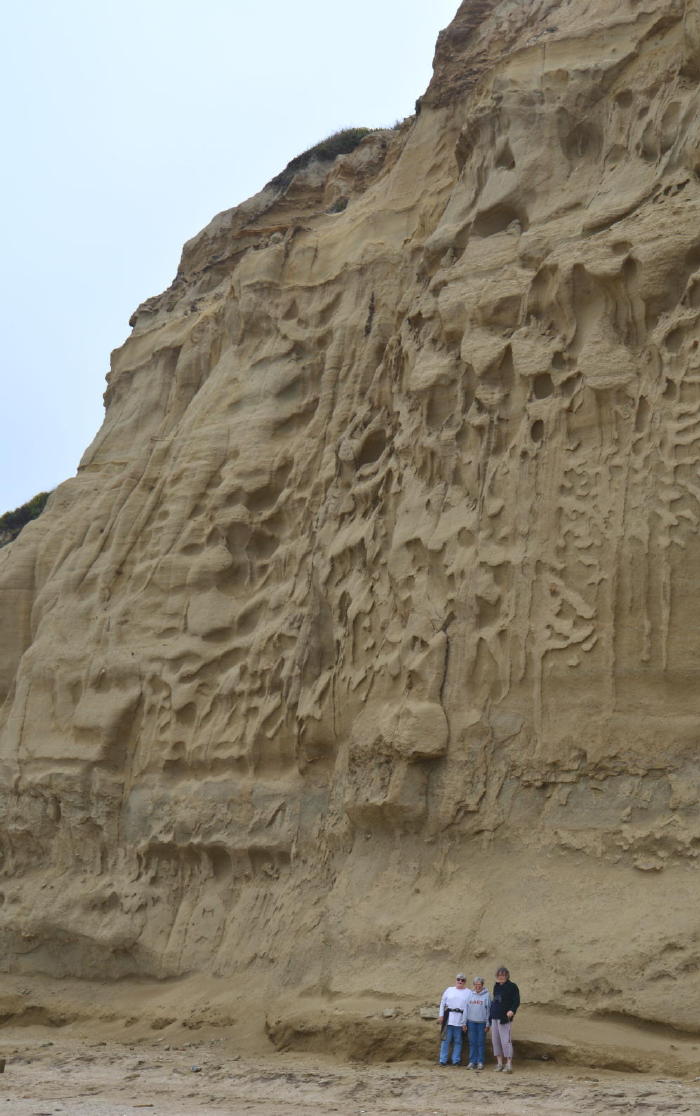 Between San Gregorio and Pomponio and south of Pomponio to Pescadero State Beach are narrow beaches backed by 200-foot, multicolored cliffs that dwarf beach visitors.

The cliffs were carved out of the remains of an ancient seabed, 2.5-7 million years old. They are part of what is known as the Purisima Formation--named in 1904 after an outcropping in the vicinity of Purisima Creek, just south of Half Moon Bay.

The cliffs are impressive in their own right, but also hide exciting surprises.

The marine origin of the formation is evident in the beds of fossil shells that can easily be seen in layers on the face of the cliffs and occasionally strewn on the beach at the cliff base. Paleontologists have also found the remains of whales and other marine mammals in the Purisima Formation, as well as sharks and other fish and even birds.

Note: Enjoy viewing the fossils, but leave them for others to see. A state-issued collection permit is required to remove fossils from state parks and beaches.

If you like caves, you can also delight in many sea caves, formed at the base of the cliffs by the erosion of waves. Most are relatively small, though still interesting. Some are fairly large, however, like one immediately south of the beach at Pomponio. Round the headland to the south from the pocket beach (at low tide only), and you will find a large cave--spacious enough to walk in for several yards. 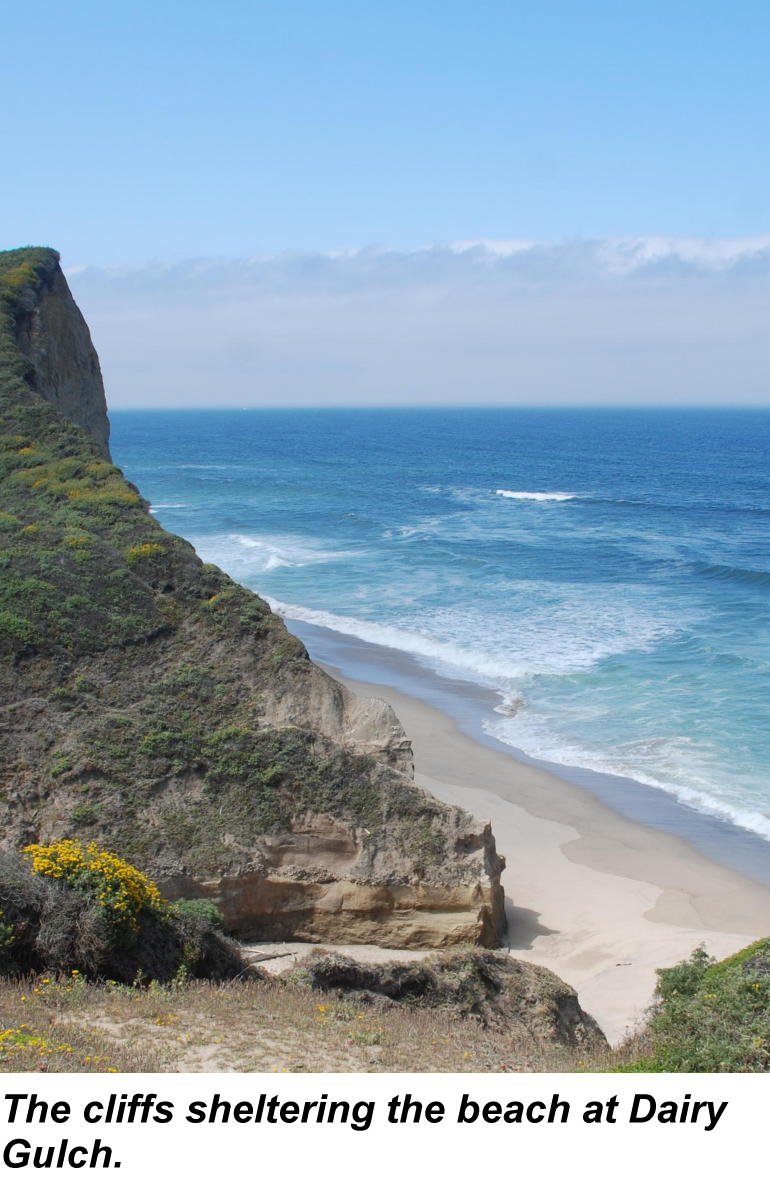 If you want a more secluded beach, walk south from Pomponio Beach at low tide and you will find two smaller beaches associated with two creeks—Long Gulch and Dairy Gulch. The beach at Dairy Gulch is also accessible from Highway 1, from a narrow parking area and steep trail about one mile south of Pomponio.

Cautions
Other than the two small pocket beaches, the beaches south of San Gregorio and Pomponio tend to be quite narrow. In the winter they can be entirely inundated at high tide, with the waves reaching to the cliffs. In the summer the beaches are wider, but you should still only attempt to access them at low tide. You can easily be cut off by an incoming tide at points where a promontory reaches out toward the ocean beyond the rest of the cliff. Check your tide chart.

When walking past the cliffs or looking in one of the caves, it is prudent to keep your distance. Both the cliffs and the caves are unstable. There are many landslides along them. Some are small, although still dangerous, but in other areas--where a cave may have collapsed--you can see fallen boulders the size of an SUV. You do not want to be caught beneath one of those.

If you want to walk north of San Gregorio State Beach very far, you should be aware that the state park ends and the private owners who run the beach have different rules than state parks.

Birds and Other Wildlife

Both beaches offer several habitats for birders to explore, each with its unique possibilities:

Consult the invaluable Sequoia Audubon San Mateo County Birding Guide for more information about the birds you might see at these beaches. 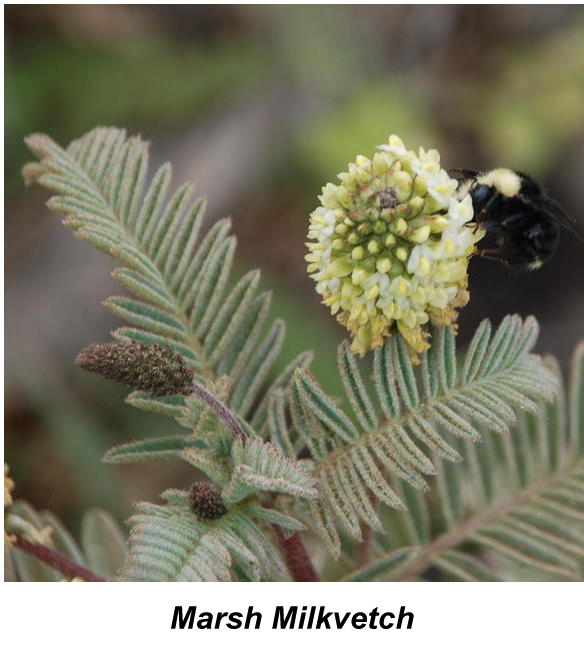 The habitats at these two beaches include diverse plant communities that are well worth exploring. Many areas of the bluffs above the beaches from San Gregorio south to Pescadero have suffered only minor disturbances and have some rich native plant communities. 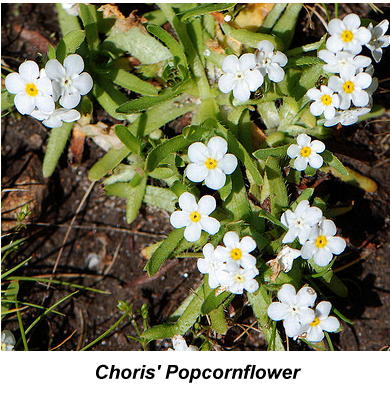 Be sure to notice some rare plants found at the beaches,

The marsh milkvetch (Astragalus pycnostachyus var. pycnostachyus), a rare and threatened species, flourishes at several points on the bluffs of these beaches. It is easy to see at Pomponio, where plants line the south side of the driveway.

Also at Pomponio, at the right time of the year, you can see the rare Choris’ Popcornflower (Plagiobothrys chorisianus var. chorisianus), which flourishes in the wet season behind the toilets at the beach.

At San Gregorio State Beach, a historic marker once commemorated the first Europeans to set foot there on October 24, 1769--the expedition of Gaspar de Portolá. The marker was vandalized sometime ago and the bronze plaque is no longer there. The photo was taken in 2006.

The area was described by Father Juan Crespí, who chronicled the journey of the expedition. He wrote: “Here in the valley there is a great deal of good soil and a stream in the midst with a good-sized flow of very delicious water, on its way to empty into the sea.” He noted that there were many willows in the stream bed, but also that “Wood there is none of; the mountain range, however, lies nearby with a great deal of savin timber (redwood trees).”

They camped at San Gregorio for three nights and during that time, according to Crespi, were fed large, black seed pies by Native Americans from a nearby village. Crespi commented that it would be a good spot for a mission, and he named it Nuestro padre Santa Domingo--Our Father Saint Dominic. Later, around 1830, San Gregorio was named for a pope, Saint Gregory the Great (540-604 CE).

The creek and park were named for a Native American from the Yokut-speaking people in the San Joaquin Valley who was given the name Pomponio when he was an alcalde at Mission Santa Clara. He became a resistance fighter against the mission system and had a mountain hideout at the headwaters of Pomponio Creek.

Pomponio and other Indians from the missions engaged in a lucrative trade in stolen mission horses, which were run by the Yokuts to the Paiute and Shoshone people in northern Nevada, who in turn traded them to the interior mountain tribes and on into Crow, Blackfoot, and Sioux country. Pomponio was captured and slain by the Spaniards in 1824.

San Gregorio State Beach is located on Highway 1, 10.5 miles south of Half Moon Bay, just south of the junction with Highway 84.

Pomponio State Beach is located on Highway 1, 12 miles south of Half Moon Bay.

Both beaches have vault toilets, picnic tables and grills. Dogs are prohibited on the beaches, but dogs on leashes are allowed in the parking and picnic areas.

If you want a special treat before or after a day at the beach, stop by the San Gregorio General Store, just one mile inland on Highway 84 at the junction with Stage Road. It has been operating since 1889, when the town of San Gregorio was a major stop on the stagecoach route between San Francisco and Santa Cruz. It is a wonderful place to wander the aisles exploring its diverse merchandise and books, chat with locals and visitors, or listen to live music on weekends.