The bright beacons in lighthouses were all well and good when the air was clear—but not so much in heavy fog or rain. That’s when audible fog signals were better to warn mariners off the rocky coast. Visitors to Pigeon Point Light Station State Historic Park usually poke their heads into the Fog Signal Building to see and learn about the beacon’s Fresnel lens. That 2-ton marvel of mid-19th-century optics is now on exhibit there, while plans and preparations are made to restore the lighthouse tower. But the beacon and tower are not all that require restoration; so do Pigeon Point’s fog horns. They are badly corroded and quite literally falling apart.

An exhibit in the Fog Signal Building describes the various fog signals that were in service at Pigeon Point. The first began service in September 1871, the year before the beacon began operating. It was a steam whistle that mariners could possibly confuse it with a ship’s whistle and that locals complained sounded like a sick cow. Once, in 1897, the whistle ran night and day for six weeks while its steam boiler consumed a cord of wood every ten hours.

The whistle was replaced in 1911 with a compressed-air siren. Its compressor was powered by a gasoline engine that greatly reduced the start-up time compared to heating cold water in the boiler into steam for the whistle. Beginning with the siren and for the next 65 years, a mariner knew he was hearing Pigeon Point’s signal if 2-second blasts were separated alternately with 6 and 20 seconds of silence.

In 1935, a diaphone replaced the siren as the primary signal, while the siren appears to have been retained as a back-up signal. Circa 1950, the siren was removed, a second diaphone was procured, and the two diaphones—primary and back-up—were placed side-by-side in their current location.

The fourth primary fog signal was a smaller, more efficient, single-tone, diaphragm device that was mounted on the lighthouse tower below the lower southwest window in the mid-1960s. This, the last fog signal, was silenced in 1976. Navigation aids based on radio signals had made audible signals obsolete.

It was the diaphone that made the classic two-tone sound. You can hear it in some old movies and TV shows. It served, for example, as The Addams Family’s doorbell. Lifebuoy Soap used the sound in old commercials to assure listeners their product prevented beee-ohhh. Today you can find recordings on YouTube.com (e.g., in the first 10 seconds of this clip).

In 1895, Robert Hope-Jones, an English designer and builder of organs (including in later years the renowned Wurlitzer of silent-movie-theater fame), invented a new tone generator. It created a powerful bass tone with strong harmonic overtones; so he named it “diaphone,” meaning “across-“ or “throughout-tones.” In 1903, John Pell Northey of Ontario, Canada, obtained the patent rights, improved the design, obtained his own patent, formed the Diaphone Signal Company, and soon began selling fog horns. Later improvements by his son Rodney led to the two-tone Type F-2T, which is the model installed at Pigeon Point.

(Left) Diaphone Controls are above a platform that obscures them from view and (right) Diaphone timing mechanism is closer to the floor. Photo: CSPA archive

Visible high on the Fog Signal Building’s exterior wall facing the sea are the horns of the two diaphones. Mostly obscured (by a stairway and platform) high on the interior side of that wall are the mechanical and electrical components that fed and controlled compressed air and produced the tones. The photo above was taken from the platform. The exterior horns amplified and directed the sound. Mounted lower on a wall are the on-off switch and the electro-mechanical device that timed the durations of the blasts and the silent intervals between them. Large tanks that held the compressed air are still in the building, as well. The old air compressors have been removed.

The Need for Preservation

Several weeks ago a foot-long metal bar, part of the structure supporting the weight of the horns, fell to the ground. Sixty-five-plus years of exposure to the corrosive seaside environment—not least the very saltwater fog that underlay the horns’ purpose—and fifty years of disuse and periods of neglect took their toll. The attachment fittings or fasteners on both ends of the bar had rusted completely through. The area of the observation deck below has been roped off to visitors.

The photo below shows the visible extent of the corrosion and apparent delaminating of some metal. Local state park officials are taking a conservative path forward. They have decided not to remove the horns immediately from the building to make repairs. The weight and fragility of the horns are unknown, and fear of damaging them is keeping them in their place for the moment.

Meanwhile, a decision must be made as to whether the horns should be removed, repaired to the extent possible, and returned to their present location. Alternatively, should they be removed permanently and put on display inside the Fog Signal Building where they could be protected from further decay? If so, then probably look-alike but nonfunctioning copies would need to be made and installed in their place, as demanded by the Fog Signal Building’s status as a registered historical structure. Unfortunately, either course will be expensive. 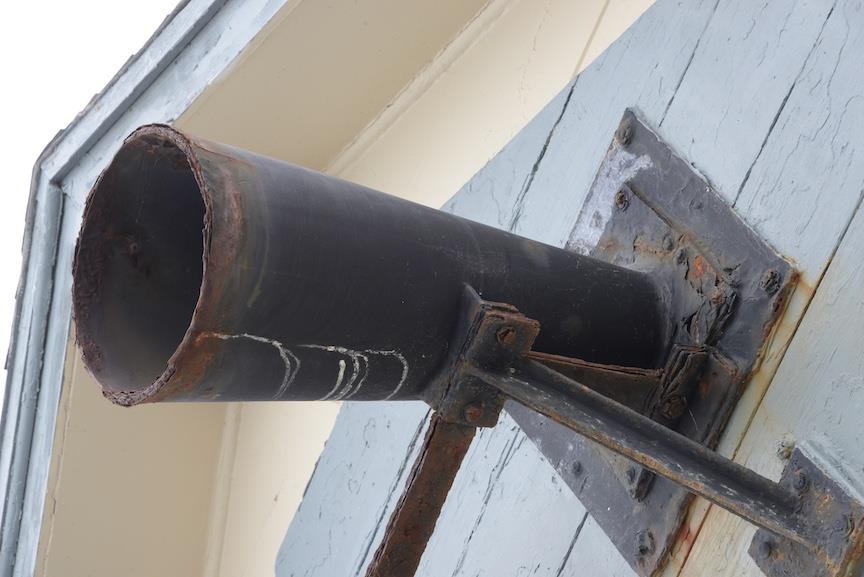