More Plovers on Our Beaches 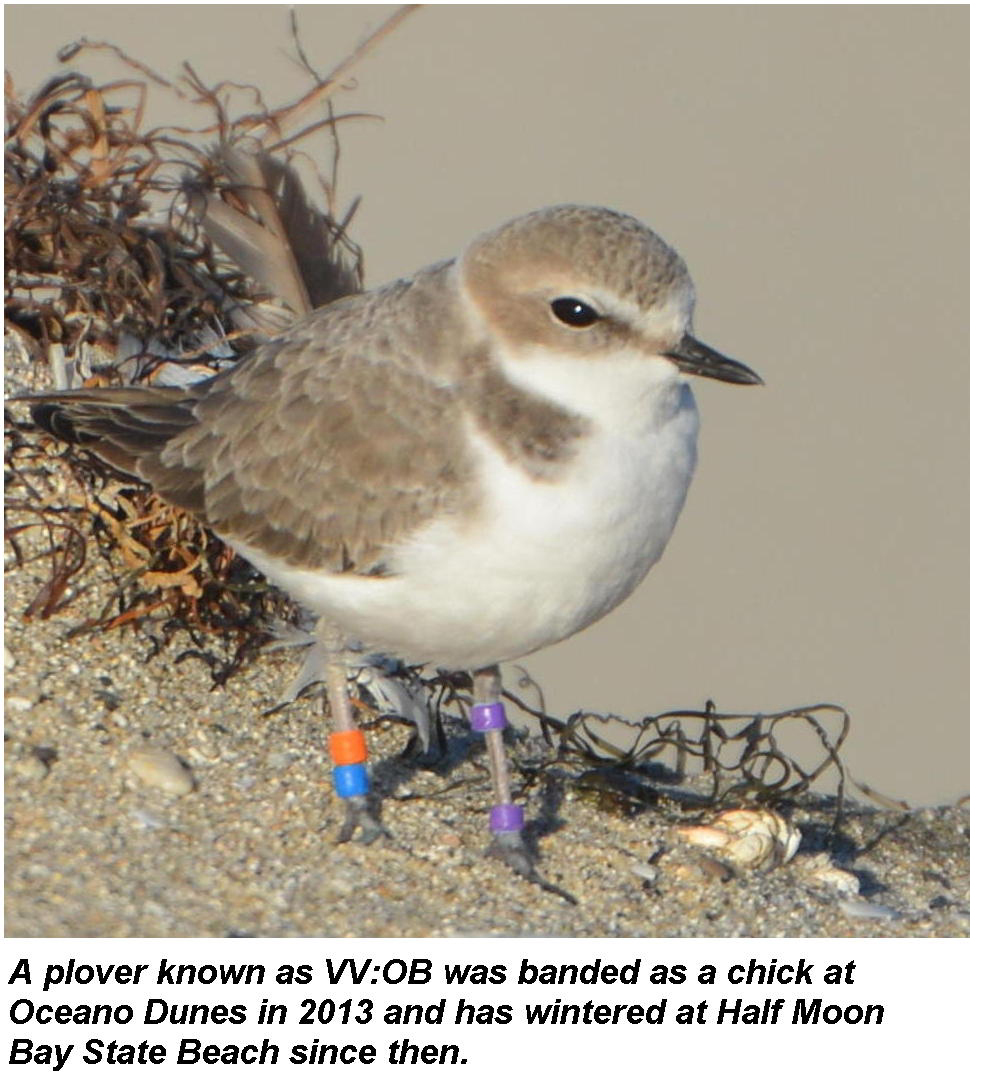 There is good news about the snowy plovers on the San Mateo Coast. The 2015 annual Winter Window Survey revealed more plovers wintering on our local beaches than in the past ten years. Preliminary numbers show that there are more snowy plovers this winter in our Recovery Unit, which is designated by the US Fish and Wildlife Service and runs along the coast from Sonoma County down to Monterey County. Plover Watchers look forward to the spring survey to learn if this means an increase in our coastal nesting population.

The Pacific Coast’s population of western snowy plovers is listed as threatened under the Endangered Species Act, so State Parks and other agencies take special measures to protect them. Following the guidelines of the federal Recovery Plan, snowy plovers along the entire U.S. Pacific Coast are counted twice each year in the Winter Window Survey and the Breeding Window Survey. The final results of each survey are posted on this webpage when they become available: http://www.fws.gov/arcata/es/birds/WSP/plover.html.

San Mateo County’s beaches were surveyed in January 2015 by 26 volunteers with support from State Park staff. They counted 152 plovers—53 more than last year and the most during the Winter Window Survey since 2004. Because snowy plovers from inland populations often migrate to coastal areas to spend the winter and return inland to breed, State Park volunteers and staff look forward to the Breeding Window Survey, scheduled for May, to provide a better snapshot of the Pacific Coast’s population of snowy plovers. The number of plovers found along the San Mateo Coast typically drops significantly in May, not only because plovers from the interior population have migrated inland but because most of the wintering coastal plovers move to other beaches to breed.

The U.S. Fish and Wildlife Service estimated in 2012 that there were only 2,500 plovers breeding along the Pacific Coast, and that only 28 major nesting sites remained. Prior to 1970, plovers nested at more than 50 locations along the coast.

Some individual plovers can be identified and their movements tracked because unique combinations of colored bands have been attached on their legs. (The colored bands are “read” top-to-bottom starting with the left leg. The colors are coded mostly by the colors’ initials; thus, the snowy plover shown in the photo with bands of violet/violet and orange/blue is denoted as VV:OB.) This year plovers were observed on the winter survey on the San Mateo Coast that originally hatched as far away as Oceano Dunes in San Luis Obispo County (238 miles away) and Oregon (over 400 miles away).

Protecting beaches where plovers might breed is very important; and there are several potential plover nesting sites in San Mateo, including Half Moon Bay and Pescadero State Beaches. The last plover chicks to hatch on our coast were at Pescadero State Beach in 2012. Two of the three chicks successfully fledged—that is, survived long enough to be able to fly. The father of those chicks has wintered on Pescadero State Beach ever since, but has gone elsewhere to breed in subsequent years.

Snowy plover nests are extremely vulnerable, since plovers lay their eggs in “scrapes” in the sand where they are easily exposed to human disturbance and predators. The camouflage of the eggs and birds, which is meant to protect them, also means they may be invisible to beach-goers. Unknowing visitors can step on nests or cause parent plovers to abandon eggs or chicks if scared away from them for too long.

Protecting beaches where snowy plovers winter is important, too. If wintering plovers feel threatened they will move or fly away. Every disturbance requires the birds to use extra energy to escape the threat. In winter months when food resources are not as abundant and when the birds may already be using more energy to stay warm or to retreat from high surf that inundates the beaches, additional disturbance can take its toll. Winter should be a time when plovers can rest and build up their energy for the breeding season.

Plover Watch volunteers based out of the Half Moon Bay State Beach ranger station help the plovers all year by periodically checking individual beaches and reporting on the plovers they see. Some volunteers help install symbolic fencing that identifies protected habitat where plovers might nest or retreat away from human disturbance. Volunteers also help educate beach visitors and school groups about the snowy plovers. Raising people’s awareness of this nearly invisible bird will help the snowy plover to survive into the future. State Park volunteers play a critical role in protecting species, such as the snowy plover, that can thrive in our State Parks with a little extra help.

If you are interested in  becoming a Plover Watch volunteer, contact the volunteer coordinator, at (650) 726-8819 or HMBParksVolunteer@parks.ca.gov.