Just in time for the 142nd Anniversary event, the internal doors were installed in the Pigeon Point Fog Signal Building and a ceremonial ribbon cutting was held during the event to celebrate this next step in the restoration project for the site.  This is the first visible step of many that we hope to facilitate over the coming years as the tower and the site are restored.  CSPA is focusing on rehabilitation of the historic structures aside from the lighthouse itself as well as restoration of the grounds.  We couldn’t do this without the continual support of our members and donors, and so once again we thank you for your ongoing support. 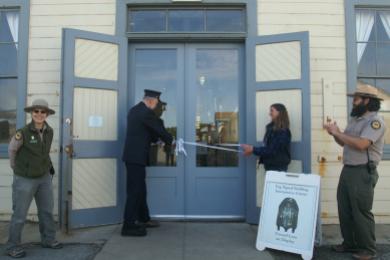 State Parks’ staff are required to protect the Fresnel lens from salty air and wind and to provide climate control because the lens is an historical artifact.  To do so they chose add these inner “storm” doors to the Fog Signal Building where the lens is temporarily stored while the tower undergoes restoration work.

However, this building has its own interesting history including being rebuilt in its current form in 1899 after the previous building burned down.

Fog signals were used in conjunction with lighthouses where visibility of the light could be obscured by fog or cloud.  Over the years, many different technologies were employed here, and Pigeon Point’s first fog signal was steam powered.  Fog signals, like the lights themselves, were assigned different characteristics so that mariners could distinguish one station from another.  Pigeon Point’s original whistle blasts were four seconds in duration, separated by alternating seven and forty-five seconds of silence.  However, the signal had disadvantages.  The sound was similar to a ship’s whistle and thus there was the danger of confusing mariners.  Also, it took 45 minutes to get sufficient steam pressure and the boiler consumed wood at a rate of a cord for every 10 hours of use.  In 1911 a first-class compressed-air fog siren, powered by a gasoline engine, replaced the whistle. It had a different characteristic than the whistle, a two second blast separated by alternating breaks of six and twenty seconds and operating pressure could be attained in just a few minutes. In 1935, the siren was superseded by a two-tone diaphone.  It is the mournful “bee-ohh” of the diaphone that people most often associate with foggy coastlines. Three of the compressed-air tanks used to run the diaphone are still located in the fog signal building.  This signal was replaced in the 1960s by a smaller single-note diaphragm horn mounted on the lighthouse tower.

A real technological breakthrough, the radio beacon, could be detected 100 miles away and in 1943 a tall antenna was installed to beam a Morse code radio signal unique to Pigeon Point.  This technology was used in conjunction with the diaphone through 1976 when the audible fog signal was discontinued.  The radio signal continued in use until the late 1990s when the Coast Guard replaced the radio beacon with DGPS (Differential Global Position System) service.  These ground-based stations emit radio signals that enhance the accuracy of GPS by correcting errors in the satellite data.  Pigeon Point is one of only five DGPS stations on the California Coast. 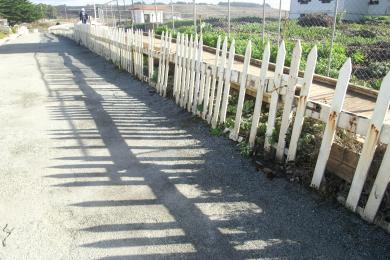 So from a start in 1871 with the steam whistle to the current day DGPS service, the lightstation at Pigeon Point continues to help mariners navigate the treacherous waters off our rocky coastline.

Our next project at Pigeon Point is to remove the non-historic raised pathway and picket fence that parallel the Hostel from the kiosk to the fog Signal Building.  Once removed, the light station will move one step closer to reflecting an earlier period of coastal history.  Watch our website for progress updates on this project.