The fundamental goal of a state historical park is to preserve a culturally significant site as it once existed, usually during its heyday. In the case of Pigeon Point Light Station, its “heyday” lasted over 100 years, during which structures came and went.

However, four structures in the 60-year-old photo above are readily identifiable as having changed little since the photo was taken. They are: (A) the light tower (completed in 1872), (B) the fog signal building (1899), (C) the detached oil house or bunker (c. 1905), and (D) the carpenter’s shop (1909). The greatest attention for preservation is being given to these four.

Telescopes for the Observation Deck

CSPA set aside funds in its 2016 budget to pay for permanently mounted telescopes for visitors’ use on the observation deck above the shoreline and adjacent to the Fog Signal Building. State Parks plans to rebuild and expand the aging deck. However, the deck project was delayed when difficulties arose in planning and obtaining necessary permits for relocating the hostel’s hot tub, which currently occupies part of the new deck’s planned footprint. Once those difficulties are overcome, CSPA intends to renew funding for telescopes.

Funds from the Sacramento headquarters of California State Parks are in short supply for restoration projects due to the large, state-wide backlog of deferred maintenance. The chances of having a proposed project funded are heightened if the project is deemed “shovel ready.” To that end, CSPA will be funding an outside firm that specializes in such projects to assess the work necessary to preserve and restore Pigeon Point’s Fog Signal Building. One of the badly corroded fog horns (Photo: CSPA archive)

In recent years CSPA has funded other projects aimed at preservation. Three are highlighted below. 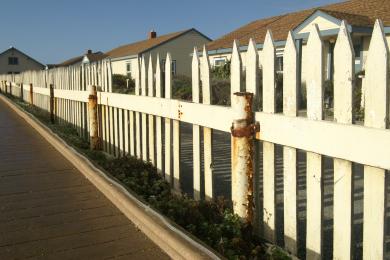 CSPA provided funds to California State Parks to cover the full cost for the removal of a dilapidated, lead-painted, picket fence and a boardwalk that paralleled the paved roadway from the parking lot to the Fog Signal Building. Shortly after the fence’s removal, volunteers restored the area with native plants from the Native Plant Nursery at Half Moon Bay State Beach.
The removal was done by a local contractor selected by CSP through a bid-and-proposal process. The fence and boardwalk were not “historical,” as they were constructed after the Coast Guard ceased operations at Pigeon Point. 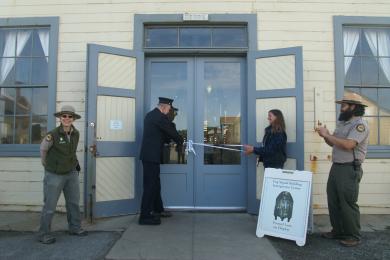 In preparation for the restoration of the light tower, the Fresnel lens was removed from the tower for temporary storage but also public display in the Fog Signal Building. As this building is also historical, its exterior appearance must be maintained, and that includes the windowless double doors of the main entrance. But opening those doors—so that visitors could see the lens from outside and be enticed inside—meant exposing the lens to the salty sea air. The solution was to install glass-paneled inner doors, which CSPA funded. The photo shows the ribbon cutting. 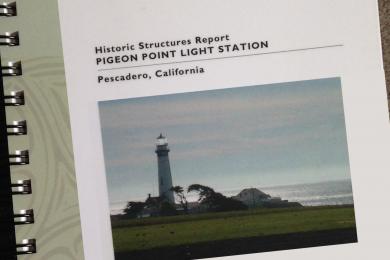 A prerequisite before detailed planning for restoration can begin is an “Historic Structures Report (HSR) [that] provides documentary, graphic, and physical information about a property’s history and existing condition.” So explains the introduction of an HSR, funded entirely by CSPA, that added the fog signal building, carpenter’s shop, and detached oil bunker as supplements to an existing HSR covering the light tower alone.