This historic ranch property is hidden in a pristine valley south of Half Moon Bay. The area offers solitude and a rich assortment of plants and wildlife along the riparian corridor of Mills Creek. The ranch is sheltered from wind and fog and is often several degrees warmer than the town of Half Moon Bay.

The historic barn built along and curving with the hillside is one of two known examples of an English bank barn in California.  It was added to the National Register of Historic Places in 1989, one-hundred years after its construction

Park Hours:  8 a.m. to sunset
Directions: Google Map
1 mile south of Hwy 92 on Hwy 1 turn east on Higgin's Canyon road and continue for just over one and a half miles. Park will be on your left.

Accessibility
We regret that there are currently no accessible activities at this park. This is an undeveloped park, with an unpaved trail and rustic bridges. Call the park or email  access@parks.ca.gov for details.

Restrictions
No dogs In park,
No collecting in park
No fireworks

An old ranch road winds its way along Mills Creek for about one mile up to a 1930s bungalow that serves as a park residence. At this point the trail veers off the road and bends down to cross the creek, allowing the visitor to look back in time while viewing the Mills Barn and surrounding outbuildings.

Continuing on the road beyond the barn, the valley narrows between steep, chaparral-covered hills. The walking is good for an additional half mile above the barn past wooden tanks, which supply water for the park residence, before the trail fades away into the dense growth of stinging nettles, poison oak, and coyote brush.

Hiking, bicycling, and horseback riding are allowed on trails and roads.

Visitors to the park should be aware that there is a shooting range near the park residence, reserved for use by state ranger, police, and sheriff personnel. 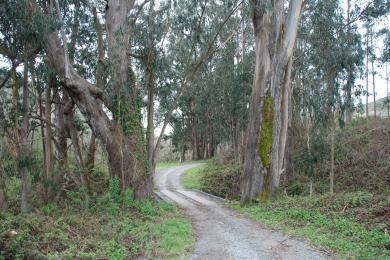 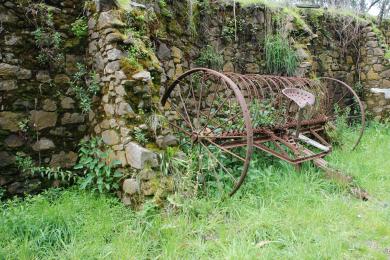 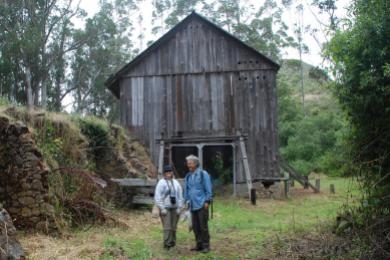 The unique Mills barn on the Burleigh Murray Ranch is an example of an English Lake Distrct bank barn and one of only two identified examples of an English bank barn in California. A bank barn is a two-story barn set against a hill or a slope so that one side appears as a single story building, allowing access to the second story via a road. This allowed for a very efficient way of feeding the animals inside.

Hay was loaded on the wagon on top of ropes, and the ropes were wrapped around the load. The hay wagon was pulled alongside the second floor of the barn by horses. An additional rope was tied to the load strung through the opposite barn window, attached to a team of horses outside on the first floor. The horses pulled the hay off the wagon into the barn. The hay was then pushed through chutes in the second floor that funneled into the cow stalls. Thus the barn, which has been called a “feeding machine,” relied on gravity and horses more than human power.

The barn was originally 200 feet long and housed 100 dairy cows; however, 35 feet of the barn were removed, perhaps to supply lumber for constructing other outbuildings or sheds.

The ranch includes a sensitive riparian corridor along Mills Creek, which contains a wide range of plants and animals and provides a large bird-breeding area. Mills Creek is also sensitive habitat because it is home to the California red-legged frog and to a small population of steelhead trout, both of which have been designated as threatened by the federal government. To eliminate an obstacle to their migration, a small, unused dam upstream of the barn was removed in 2000.