Environmental Restoration efforts have been underway at the Pigeon Point Light Station since 2006 shortly after California State Parks entered into negotiations to acquire the Historic Park. A small group of volunteers sought to eliminate the ever-present and dominant ice plant that covered the entire area and restore the area with native plants.

The site had been heavily disturbed by human activities with exotic plants displacing the native coastal scrub and coastal prairie that existed prior to settlement. Then the U.S. Coast Guard had planted ice plant to prevent erosion and because it was deemed beautiful. 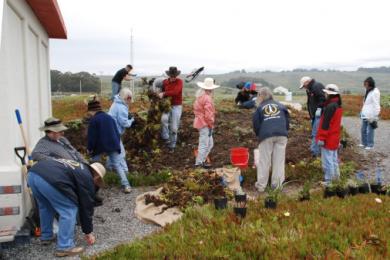 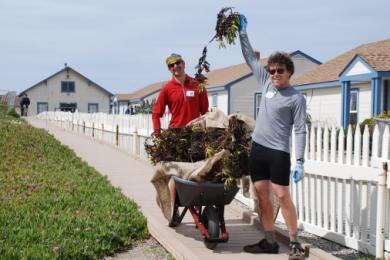 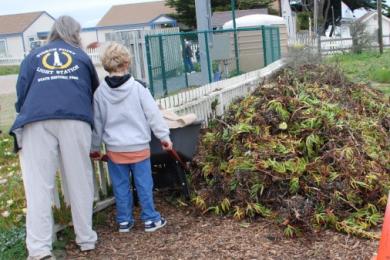 Volunteers removed the nearly 12-inch mats of ice plant mostly by hand, without the use of herbicides.  It is a huge undertaking as removing non-native plants takes at least three consecutive years until the remaining seedbed is depleted.  This varies from plant to plant depending of if the plant grows from seed, runners or bulblets.

There were valid concerns about the possible success rate for this coastal habitat restoration project, as there is no water for irrigation so it was unknown if the native plants would thrive. Any restoration project is dependent on natural rains and coastal fog for moisture.

At Pigeon Point, after many cubic yards of ice plant were removed, some native plants grew from seeds that had been long dormant in the soil under the ice plant. Other plants were raised in the Half Moon Bay Native Plant nursery for transplanting at Pigeon Point, including beach bur, coast buckwheat, seaside daisy, gumplant, beach primrose, sagewort and yarrow.

In 2011 the new parking lot project, funded by the state coastal conservancy, opened another opportunity to plant native plants in the new open spaces around the parking lot