A broad expanse of sandy beach curves around the scenic bay and defines four beaches—Francis, Venice, Dunes, and Roosevelt. A group campsite named Sweetwood is close to Dunes Beach.  The local State Park Ranger Station is located at the southernmost beach, Francis Beach, which also offers overnight camping, a Visitor Center/Park Store and supports a Native Plant Nursery. The other beaches extending north—Venice, Dunes, and Roosevelt—are day-use only.

Restrictions
No dogs on beach, must be on leash in park
No collecting on beach
No beach fires
No fireworks

Restoration of native plants is constantly underway at Half Moon Bay State Beach and all the other State Parks on the San Mateo coast.  The Native Plant Nursery is staffed by volunteers who collect seeds and cultivate the plants for placement in the appropriate habitat. Some of the results can be seen on the Native Plants Trail just north of the campfire arena at Francis Beach.

The open areas of the sandy beach and dunes attract numerous shorebirds that feed on the abundant invertebrates. The most notable bird seen is the tiny western snowy plover that inhabits the beaches year round and nests on Francis Beach between March and September. It may be seen scurrying about on the sand and water’s edge, or sitting well camouflaged in footprints in the sand. 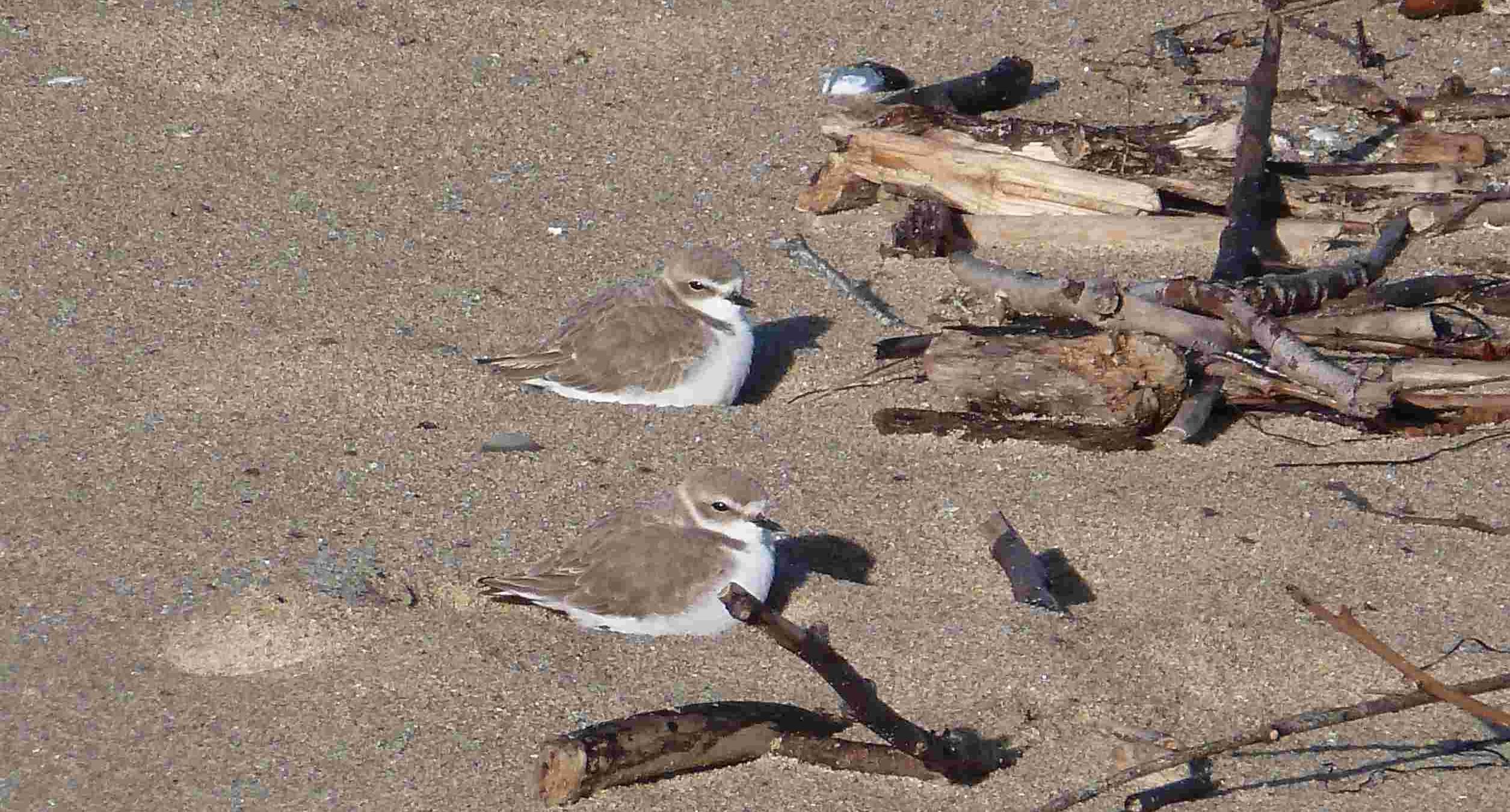 Snowy plovers in footprints in the sand. (Photo © Suzanne Black)

The western snowy plover is protected as a threatened species under the Federal Endangered Species Act. Their traditional nesting areas in the Francis Beach dunes are protected with a cable “symbolic fence.” Boxed-in wire “exclosures” are erected to protect nests from predators but allow parents and chicks to go in and out. State Parks sponsors the Snowy Plover Watch volunteer program to help study and protect the plovers along the San Mateo County coast.

Francis Beach has an all-terrain beach wheelchair, made possible in part from a grant by the local chapter of the Lions Club. Unlike street wheelchairs, this specially designed chair has large balloon tires that allow the chair to be used on the beach without sinking into the sand. With this chair, wheelchair users may access the beach at several locations along the Half Moon Bay State Beach. The chair is available for use by the public at no cost, and may be checked out from the Francis State Beach's entrance station on Kelly Avenue.

The Native American inhabitants used the beaches for digging clams and fishing. Streams furnished fresh water and also added to the habitat where food could be gathered. At least two prehistoric sites have been found near Frenchman’s Creek.

Francis Beach was named for Manuel Francis, whose family lived nearby in the 1870s. The level marine terraces of the San Mateo coast were converted from a native coastal scrub plant community to agricultural fields in the early 1800s. The State of California acquired the local state beaches and adjacent land in 1955. Cultivation of the terrace ceased and the fields soon were dominated by exotic (non-native) grasses and weeds, which are now being removed to restore the natural habitat.

The Ocean Shore Railroad, which operated from San Francisco to the Coastside between 1908 and 1920, generally followed the path of the present Coastside Trail. The railroad encouraged development on the coast. One of the subdivisions laid out at that time—the city of Naples—was at the site of the present Roosevelt Beach. According to Barbara VanderWerf, in her book The Coastside Trail Guide Book, local farmers sold their land to developers in anticipation of the coming of the railroad, and by 1908 most of the frontage on Half Moon Bay had been subdivided into streets and building lots.

The park at Sweetwood was home to one of the last holdouts, Frank Martin, who owned the land on both sides of the Frenchman’s Creek. VanderWerf notes that Martin let Ocean Shore trains run across his property, but he refused to subdivide. She speculates that he planted the parallel rows of cypresses and pines, which can still be seen there to screen the train as it puffed its way along the bluffs. After changing hands several times, the Sweetwood property was sold to the State of California in 1967.