During the month of June, Año Nuevo State Park showcases the Steller sea lions of Año Nuevo Island with special exhibits, natural history information and special wildlife viewing.  There are many opportunities for visitors to view these magnificent creatures that use Año Nuevo Island as a roosting and haul-out site. 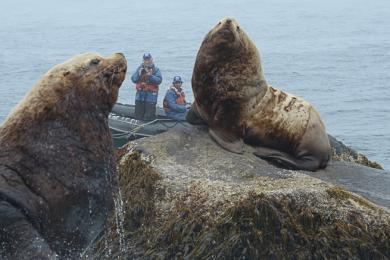 Steller sea lions are the largest of the eared seals, and only northern and southern elephant seals and walruses are larger.  Usually spotted on the northern section of Año Nuevo Island, males exhibit very large necks and shoulders with a golden colored mane (naturally causing them to be named sea “lions”).  Mature California sea lions, when compared to their Steller cousins, have a much smaller neck and a melon-shaped forehead.

Unlike northern elephant seals—another of Año Nuevo’s seasonal visitors—Steller sea lions do not migrate but range widely in the ocean when foraging.  We are fortunate to have the southern-most breeding colony in the eastern Pacific at Año Nuevo Island.  Steller sea lions are a species of the northern Pacific Ocean with a population extending from the Bering Sea southwest through the Kuril Islands and the Sea of Okhotsk to Japan and Korea and southeast along the coast of North America to Año Nuevo Island.  They formerly bred as far south as the Channel Islands, but they have not been observed there since the 1980’s.

During May, dominant males over approximately 9-years old establish and defend well-defined territories.  Mature females and their offspring, from the previous season or two, arrive a week or so later, with the females giving birth within several days.  Then, females mate 10-14 days after giving birth, although the fertilized egg does not implant in the uterus until late fall.

The mothers nurse their pups for about 1 to 2 weeks before returning to the sea to feed.  During the next couple months the females spend about equal time hunting at sea and nursing their pups on land.  They gradually spend more time at sea as the pups start their own foraging.  Weaning Steller pups is a slow process that lasts anywhere from 10 months to 3 years.  During breeding season, Steller males do not eat.

At some point in late summer, males, females and pups leave the rookery to forage in the ocean on a wide range of fish and cephalopods.  Steller sea lions prefer schooling fish and forage primarily between intertidal zones and continental shelves.  Also, they are known to enter estuaries to feed on semi-freshwater fish such as sturgeon and salmon.  While foraging, Stellers continue to haul out on Año Nuevo Island and other remote islands.

We hope you have the opportunity to view these wonderful marine -mammal residents of our San Mateo coastline.  More information on Steller sea lions can be found on websites of the NOAA National Marine Mammal Laboratory and the Alaska Fisheries Science Center.